A STATELY HOME REMEMBERED (I)

Recently re-visiting my rapidly increasing and creaking collection of photographs, I came across the above family image which brought back memories for me from some 50 years ago.  My attention was arrested though, not by the people in the foreground (my wife with her father), but by the presence behind them of the rather grand looking, Georgian styled Framland House, as this old building was always known but is sadly now, just that memory.  This once grand, three-storey residence stood elegantly for over a century with its ornate front door abutting Burton End at the foot of the 'new' railway bridge as it begins its rise on the main road to Oakham; immediately opposite and across the road, stands the old building now known as Cardigan House. The now vanished 'footprint' of Framland today relates pretty well with the entrance to the town Railway Station and the new Borough Council offices.

Seen on the Ordnance Survey map of 1895, the substantial dwelling is shown to be in three separate sections, all adjoined to a sizeable garden contiguous with a small public path which still leads pedestrians and small vehicles to the joys of the Play Close further on.  I have memories of the decaying and abandoned home, which in its final years provided a haven for young children who seemed to have been free to wander about its spooky innards in a search for the reported 'ghost' which was alleged to haunt the crumbling rooms, peeling wallpaper, cracked paint, broken windows and all. Deterioration rapidly set in as the rain and weather permeated the structure via a roof now robbed of its leaden waterproofing and rotting windows.  The abandoned gardens would later provide valuable space for a few rented allotment plots, eagerly utilised by an older generation of gardeners from which, no doubt, bountiful harvests were produced over the years.

Thus far, I have failed to discover the date of original construction, the origins of its name, or that of the builder, but whilst waiting for someone to perhaps put me wise, I am plumping for a date of around the beginning of the 1870s. Though the characteristics of the house - especially the line of the roof and the style and size of the windows - might suggest a Georgian connection, I cannot accept that it was built as early as the 1820s. From what I have discovered, I currently hazard a guess that the first owner was most likely local resident, Robert Winter Johnson (1833-1884), builder and architect of some repute in his day who was later to be employed as Surveyor for the Local Board, later to become known as Melton Mowbray Borough Council.

An attractive building aesthetically and perhaps, pleasing to the eye, it also possessed the somewhat severe lines of an public institution or civic establishment, it might well have stood much longer into the 21st Century in different circumstances but fate was to decree that Framland House would just about reach its hundredth anniversary before the wrecker's ball arrived to create extra width and public safety at an awkward part of the main approach to the busy railway station. I personally remember well a time in the 1970s when slates continued to fall from the roof and bad weather frequently caused chunks of rusting cast-iron guttering to crash down to the pavement to the obvious great danger of passers-by. Of course all this insecurity created problems of illegal trespassing and wanton damage which a boarded-up building always attracts. With the apparent difficulty of tracing a legal owner or someone responsible for its proper maintenance, the old unwanted building faced the eventual ignominy of a compulsory purchase order which accelerated its inevitable demolition.  In 1976, another historic part of the old town vanished from the scene, together with its many secrets and some interesting moments witnessed.  In the course of my research back over those 100 years I have discovered some most interesting facts about some of the people who once lived in the old house.

On the 15th July 1911, Framland House went up for auction but failed to reach its reserve price of £800 and it is reported that local property agent Shafto H. Sykes later acquired the property by private treaty and placed it on the rental market via Messrs. Shouler and Son, local Auctioneers and Estate Agents. A notice in the Grantham Journal was to offer readers: 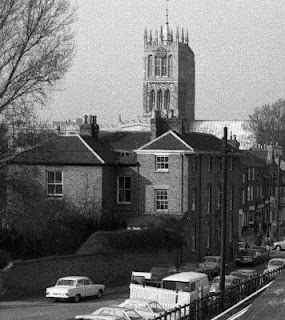